We often receive calls and are asked if we repair roofs.  The answer is yes!  Repairing roofs is one of our favorite things to do.  Not only do we enjoy the challenge, but we enjoy helping to protect your investment.  Another benefit to us, is that we get to see how roofs are performing under a variety of circumstances.  Many repairs we have done have motivated us to tweek some of our installation standards, even recommending that the manufacturers include these "tweeks" in their installation instructions.  Below you will find some of the repairs we have done.  I am going to try and update this page as more repairs are made.

Repairs, on the roof, from shingles, to chimneys and other roof types

Once we got on the roof it was easy to spot why it was leaking.  Wind damage.  We were able to find shingles that were an exact match and we were able to install them and stop the leak.

A common problem with laminated shingles is the nailing zone near the lap.  In this scenario water was being fed underneath the shingles by debris and moss.  Eventually the water rusted out the nails and got to the sheeting.  Another problem in this situation was that the installers did not install their nails far enough away from the water slot.  These problems combined to create a roof leak.  Although we were able to locate the nails that were causing the leak and repair them.  This roof will need to be replaced because of the bad installation.  During our inspection of the attic we found that the roof was leaking in many areas.

Here is a wood chimney in Steilacoom, WA.  These wood chimneys are built to provide the look of a traditional chimney around a stove pipe.  They are often built poorly and is such a way that doesn't follow basic waterproofing principles.  These chimneys are installed on various roof types, from shingles to tile.  This was eventually rebuilt by All Terrain Painting and Repairs N.W. LLC and we installed new flashing at the roof transition.  The pictures show several areas where the water was coming in.    One noteworthy picture is the close up of the corner trim board.  The installers used two pieces on the corner and they cut the joint with a 45 degree angle.  The only problem is that they angled the joint in such a way that it fed water behind the siding.  Not Smart! 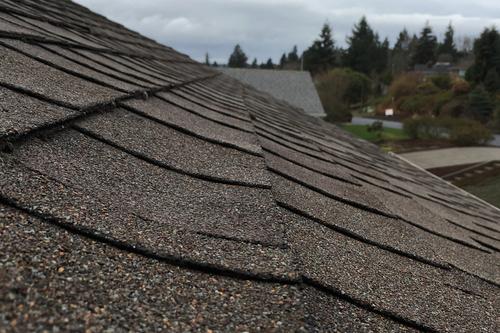 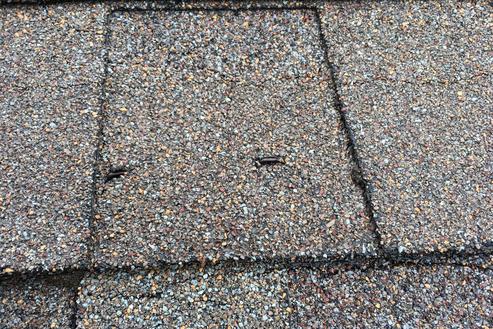 The situation in these pictures is unfortunately, very common.  Gutter installers will typically drain an upper roof gutter on to a lower roof.  This will void your roofing warranty.  Very often the result of this is a roof leak.  Unfortunately for this homeowner the leak caused interior damage that will not be an easy repair.  We were able to get an exact match on the shingles and repair the roof.  We also extended the downspout to the lower gutter to prevent any more damage.

Built in gutters have were a popular choice in the 1970's and 80's.  A built in gutter is a gutter system that is part of the roof.  Typically torch down or other single ply roof types are used as a waterproof membrane.  Built in gutters are a good option, but like aluminum gutters they need regular cleaning to be effective.  The picture to the right shows a neglected gutter.  The downspouts and gutter are extremely full of debris.  In this scenario we were on the roof to repair shingles that had blown off.  This building was part of an apartment complex with fifteen buildings. I took this picture to show the manager why water was overflowing the gutters.  The whole complex needed the gutters cleaned out.  I gave them a price if we did it, but I also mentioned that it was something their regular maintenance staff could handle if they had the time.  I never heard from them on this, so its possible that they ended up cleaning it out themselves.  But more than likely its still full of debris.

While installing the roof, the installer needs to be very aware of the depth of penetration of each nail or staple (staples are no longer an approved fastener by quality manufacturers).  This is very important on most roof types.  Many times they are not installed properly.  When the fasteners are installed without penetrating far enough into the shingle, it stick ups.  Over time this high fastener will wear out the shingles above it and create a hole.  This can cause a leak.  These can easily be repaired, but require a thorough inspection to be found. 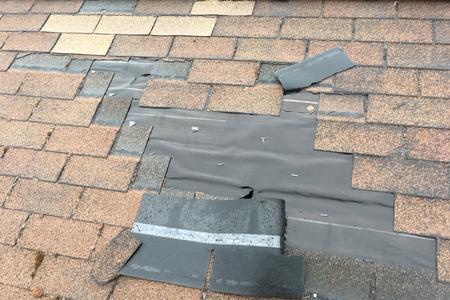 One of my favorite roof systems to work on is Torch down.  The homeowner was getting ready to sell this property and we were asked to inspect the roof.  We found that the flat roof had dry rot under the roofing.  I cut and removed the roofing, replaced two sheets of plywood.  Then I installed new torch down and coated the entire roof with APOC fibered aluminum roof coating.  The new owners will have no problems with this roof.

The slideshow to the right reveals a common problem with all laminated shingles and other roof types (except Malarkey).  Because of the way laminated shingles are designed, water pools at the bottom of the shingles.  While its sitting their it will roll over the edge of the shingle and follow the shingle up hill an inch or more.  One of the pictures shows the bottom side of the shingle wet from wicking water.  This problem is amplified with moss and debris.  The roof was only twelve years old and was leaking everywhere.  It was installed according to the manufacturers instructions, but because of the design and the debris it failed.  After we saw that this was happening with laminated shingles we decided to primarily sell Malarkey roofing products.  Their design and nailing area help to prevent this problem.

The valley on a roof is often where a leak will occur.  The valley had to be taken apart, rotten wood replaced, and the roof reassembled.  I was able to get an exact match on the shingles and installed a metal valley.  This valley will not leak again.

One major concern we have after performing hundreds of repairs is with the design of Laminated shingles.  We would be happy to show you what the problem is and why we feel that the Malarkey shingle's have the best design and composition.

The nails at the base of this stove pipe flashing were too short and after several years they pulled loose and the bottom of the flashing curled up.  This created a flat spot on the roof and water was directed to the right and underneath the shingles.  After removing the shingles to verify that this was indeed the problem the repair was simple.

A customer called about a leak in their roof around the chimney.  99% of the time cause of the leak is the chimney and not the roofing.  After a thorough examination of the attic and the roof it became clear that this chimney was no exception.  The video reveals all the different ways that water was getting in on this chimney.

Here is an example of the affect of buckling plywood on a roof.  Underneath the roofing the plywood has buckled.  You can see this in the picture to the right. Look closely at the shingles.  This has created a spot on the roof that is almost flat.  As water sheds down the roof, it collects on this flat spot, pools, runs sideways and eventually runs off the roof.  The problem is that as it pools and goes sideways, it can get under the roofing and then penetrate to the plywood.  Fortunately this roof got replaced within a couple weeks after our inspection.  This is a very common problem when plywood is used as the roof decking. 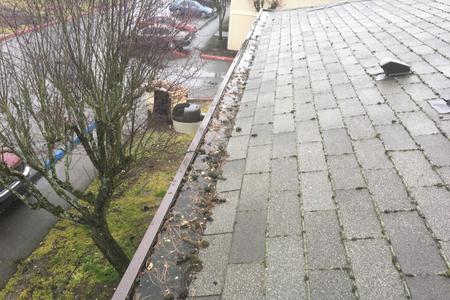 Roof leaks can be caused by a number of factors, including squirrels.  In this case a squirrel had climbed on to the roof and removed shake roofing, felt paper and insulation to create a nice entrance into the attic.  While this may have been great for the squirrel the owner of the house was not very happy.  We removed all of the wet insulation, installed new dry insulation, felt paper and shake roofing.  The squirrel is going to have to build a home somewhere else.